Assault Hound is a new unit type in Anomaly 2, it roughly replaces the APC in Anomaly Warzone Earth.

The Assault Hound has considerable firepower and good range. Its rate of fire increases when firing and reaches maxium power after twelve seconds. Its cannon cool down quickly though, so you constantly keep enemies in its path. The units' rate of fire should be considered high. 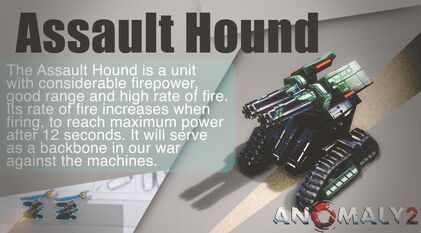